Ted was born and raised in Dallas‚ Texas.
He earned a Bachelor of Science degree in Justice Studies from Arizona State University‚ in Tempe‚ Arizona in 1988. While at Arizona State‚ Ted interned at the Arizona Attorney General’s Office‚ participating in criminal investigations‚ and the Dallas County District Attorney’s Office‚ working with both misdemeanor and felony attorneys while assisting in their criminal cases.

In 1992‚ Ted received his law degree from the University of Tulsa.
After becoming licensed in the fall of 1992‚ he began practicing criminal law in Dallas County. As his practice grew‚ he began to handle cases throughout north Texas‚ spreading to west Texas‚ San Antonio‚ Houston and Oklahoma‚ and today continues to practice criminal law throughout the southwestern United States.

Since he began practicing law in 1992‚ Ted has handled over 4000 criminal cases‚ and has tried more than 100 felony jury trials‚ trying everything from D.W.I.s to highly publicized serial rape cases. Ted has earned not guilty verdicts in cases ranging from misdemeanor evading arrest to 1st degree murder. 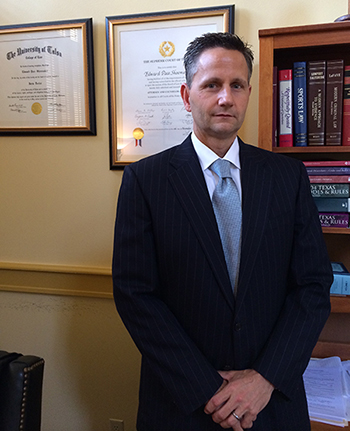